MELBOURNE, Australia — As the sad scene now playing out on an Australian beach attests, rescuing an animal larger than a car is no easy matter.

On Wednesday, around 230 pilot whales were stranded on a remote stretch of the western coast of Tasmania, the Australian island state. A scramble started almost immediately to save as many as possible.

A pilot whale — technically a kind of dolphin — may be up to 20 feet long and weigh as much as two tons. In most cases, their muscular bulk is an advantage: They have few natural predators and are a lethal, divebombing threat to the cephalopods on which they feed.

But stranded on a beach, their size can be deadly. “Because they’re so heavy, their body weight will literally crush their organs,” said Vanessa Pirotta, a wildlife scientist affiliated with Macquarie University, in Sydney. “Depending on if they’re upright or on the side, this will be compromising how they breathe and their lungs’ ability to function properly.”

And as the hours pass, the mission becomes a fight against probability. Rescuers have at most a day or two before the animals’ internal organs are too damaged. “The moment a stranding happens, the clock starts ticking,” Dr. Pirotta said. “The longer an animal is on the beach, the less likely it is to be returned back to sea.”

Around 230 pilot whales stranded on Wednesday. The pilot whale — technically a kind of dolphin — may be up to 20 feet long and weigh as much as two tons.Credit…Matthew Newton for The New York Times

By the end of Thursday, about 200 of the giant mammals had died. But defying the worst predictions, rescuers succeeded in saving around 32 others, tying them alongside boats provided by local fish farms and dragging them out to the deep water outside the harbor. A boat could ferry two whales at a time, one on each side, in the hourlong journey.

“They slowly go out to sea with them, until they get a little bit of strength back,” said Sam Gerrity, a local boat skipper who also works in the tourism industry.

But there is no guarantee that a rescued whale will survive.

Weakened from their time on the land, whales are not always strong enough to cope with the rough ocean conditions or able to swim against the tides and currents that can push them back ashore.

“They are somewhat compromised when we do release them,” Kris Carlyon, a marine biologist with the Tasmanian government, said at a news conference on Friday. “We need to give them some time to to get themselves together physiologically.”

The journey out to sea is an opportunity for the animals to calm down after a highly traumatic experience. “I compare it to a concert where a panic happens because of a fire,” said Olaf Meynecke, a marine researcher at Griffith University, in Brisbane. “People can’t make conscious decisions because of that emotional stress.”

Some will be summoned back to the beaches where other whales lay, especially if they hear them calling out from the shore. “They’re experiencing the stress and the fear losing a partner or a friend, and then that is actually overriding all instinct of survival,” Dr. Meynecke said.

By Friday morning, only a handful of the rescued whales had been stranded again, which was considered a victory. One died on the beach; another five were euthanized.

The whales have trouble navigating when they enter shallow waters. When one is in distress, it calls for help, drawing many others into danger.Credit…Matthew Newton for The New York Times

For pilot whales, who use echolocation to navigate, entering the shallow waters near beaches can be a death sentence. “They can’t navigate,” Dr. Meynecke said. “The sediment takes up all the sonar.”

So begins a deadly chain of command: One whale will call for help, then others in their pod will rush to their side, where they, too, become unable to escape. “It turns into this cascading effect, where the entire group, the superpod, moves into this dangerous area. They all end up there, but they all can’t actually get out,” Dr. Meynecke said.

The whales become gradually more panicked and confused, resulting in strandings of up to hundreds of the animals. Whales draw in not only their friends, but also their friends of friends. Pilot whales are deeply social animals who remain in their mothers’ pods for life and who form profound bonds with their relatives and friends, according to Dr. Meynecke.

Once every animal that can be saved is taken out to sea, they face the difficult task of disposing of the animals.

On a wet Friday morning, scientists first took samples from the carcasses on the Tasmanian beach to share with researchers around the world. “By looking at their genetics, we can look at how the animals may have been related,” said David Hocking, a scientist from the Tasmanian Museum.

Next, workers used an arsenal of SUVs, tractors and a telehandler — like a giant forklift — to tug the wales roughly a mile along the coast to a place they could be easily taken out to sea. The carcasses were lined up over hundreds of yards, with their fins pointing up toward the sky and a thick rope tied around their tails.

When the weather allowed, a boat would pull a convoy of dozens of dead whales, one tied together after another, out to sea. Then, over a space of about six miles, the whales would be cast off from the rope and deposited back into the deep ocean.

The rescue this week in Strahan, a village of around 650 people, happened two years to the day after 470 whales beached themselves in the same area.

Handling a stranding of this type — whether it is protecting the animals from sunburn, returning them to sea or disposing of them — is an enormous effort that requires support from almost the entire community. To save even a few dozen whales, as took place in Strahan this week, is a triumph against the odds.

“Everyone learned a lot from the last time,” said Mr. Gerrity, the skipper, of a record-breaking stranding in 2020, with a sigh.

The stranding this week happened two years after 470 whales beached themselves in the same area. Pilot whales are deeply social animals who remain in their mothers’ pods for life.Credit…Matthew Newton for The New York Times

Of Barbecues and Men: A Summer Storm Brews Over Virility in France

By Train, Bus or Uber, Giuliani Is Told to Come to Georgia 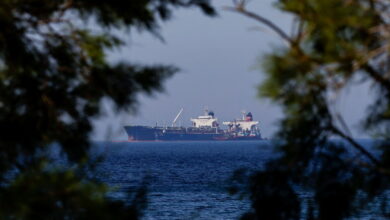