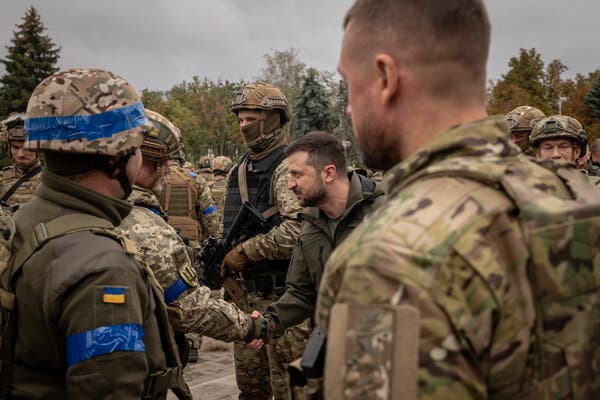 President Volodymyr Zelensky of Ukraine in Izium on Wednesday.Credit…Nicole Tung for The New York Times

Volodymyr Zelensky, the Ukrainian president, made a surprise appearance in the recently reclaimed city of Izium in Ukraine’s northeast. It was a tangible sign of Ukraine’s soaring morale and its growing confidence — a demonstration that the military could ensure its leader’s safety even miles from the front.

In Russian cities close to the fighting, the mood is one of anxiety. In Belgorod, 25 miles from the Ukrainian border, the sounds of nearby explosions have become regular occurrences. Military trucks and armored personnel carriers spray-painted with the letter Z rumble through intersections, and refugees pour in from territories in Ukraine.

Vladimir Putin, the Russian president, has tried to keep life as normal as possible for most Russians and make the hostilities in Ukraine a faraway concept. But with Ukrainian forces now on the offensive, some residents of Belgorod feel as if the war has come to their doorstep.

Putin: The Russian president faces mounting internal criticism over his faltering invasion. The Kremlin has rebuffed calls for a full military mobilization.

After days of uncertainty, Sweden’s right-wing parties have narrowly won the country’s election, buoyed by surging supportfor a far-right nationalist party, the Sweden Democrats, and most likely ending eight years of rule by the center-left. The authorities said that the right-wing bloc had won 176 of the 349 seats in Parliament, while the left-wing bloc secured 173 seats.

The most stunning development was support for the Sweden Democrats, once considered an extremist party, which emerged as the second most popular party in the country. While the party’s support will be essential for the right-wing bloc to maintain its majority in Parliament, it is unlikely to be a formal part of the new government.

The new government is expected to be led by Ulf Kristersson, head of the center-right Moderate Party, as prime minister. Analysts said that the vote on Sunday had been one of the closest in modern times and reflected a desire by Swedes to move in a new direction after decades of center-left policymaking.

Factors: Issues of gun violence, energy supply and soaring inflation all contributed to the tightness of the race — as well as deeper questions about Swedish identity, a diversifying country and a failure to integrate immigrants, especially those who arrived in Sweden during Europe’s migration crisis in 2015.

The Interpreter: The result is the latest example of the right’s staying power across Europe, our columnist Amanda Taub writes.

Rounds of record-shattering flooding have struck Pakistan since June, inundating hundreds of villages across much of the country’s fertile land. In Sindh Province in the south, the floodwater has effectively transformed farmland into two large lakes. Pakistani officials have warned that it may take three to six months for the floodwaters to recede.

So far, around 1,500 people have died — nearly half of them children — and more than 33 million have been displaced from their homes by the floods, which were caused by heavier-than-usual monsoon rains and glacial melt. Scientists say that global warming is sharply increasing the likelihood of extreme rain in South Asia.

Tens of thousands of people are now sheltering in schools and public buildings or along roadsides and canal embankments in tents of tarp and rope. Many of those whose villages were not completely submerged have remained in their homes, effectively marooned.

Conditions: The Pakistani authorities have urged people to leave the isolated villages, warning that their remaining could overwhelm already strained aid efforts, cause widespread food insecurity and spark a health crisis as diseases spread. Already, malaria, dengue fever and waterborne diseases are rampant, and the government has shut off power to the area.

The Greek island of Tinos is said to be the birthplace of Aeolus, the Greek god who managed the violent storm winds, and was known in antiquity as the “island of the winds.” Respecting those winds involved some key rules, the Times correspondent Jason Horowitz learned on a recent trip: The doors needed to stay shut. Don’t touch the windows.

“We hoped Tinos would refresh us, that its restaurants would replenish us, that the rugged landscape would leave us blown away,” he writes. “We almost were.”

SPORTS NEWS FROM THE ATHLETIC

How Manchester United, Liverpool and Arsenal all missed out on Erling Haaland: Three Premier League superpowers missed out on Haaland, who is off to an otherworldly start in his first month with Manchester City. But there is an explanation. “Liverpool could have got him.” Ouch.

The Women’s Super League is back: After England’s glorious success at Euro 2022 in July, the domestic league returns on Friday. (It was delayed by a week after games were postponed following the death of Queen Elizabeth II). Here’s a look at stars to look out for, why Chelsea is the favorite and a hope to surprise.

An early peek at FIFA … the video game: Who are the most improved players in FIFA 23? It’s the question every fan of the iconic game wants to know. We have a sneak peek.

In English, the musical “Hamilton” begins: “How does a bastard, orphan, son of a whore and a/Scotsman, dropped in the middle of a forgotten/Spot in the Caribbean by Providence, impoverished, in squalor/Grow up to be a hero and a scholar?”

In translating the musical, with more than 20,000 words and 47 songs, into German for a production in Hamburg, Sera Finale, a rapper turned songwriter, and Kevin Schroeder, a theater translator, had a major challenge on their hands: maintaining the original lyrics’ directness without overstating the case or demeaning the West Indies.

At the same time, they had to interpret the original show’s dense references to hip-hop and American history and preserve the meaning for a German audience. That often meant writing new lyrics, which they would pitch to the show’s creator, Lin-Manuel Miranda. Listen to examples from both versions.

The resulting opening lines, translated back into English, are similar, but not exactly the same: “How does a bastard/Who crawled out of the lap of a bleak harlot/From a goddamned, lost hole in the Caribbean/With no title, no means, no merits/In the end still become a hero and a scholar?”

Miso soup might just be the perfect soup. Add shiitake mushrooms, clams or even chicken.

The plane’s a filthy mess. Who’s to blame?

Revisit some favorite Judy Blume novels from the ages.

And here are today’s Wordle and the Spelling Bee.

That’s it for today’s briefing. Thanks for joining me. — Natasha

P.S. The Times welcomes new colleagues in audio, including Sophia Alvarez Boyd, who joins Opinion Audio from NPR as a producer on “First Person.”

The latest episode of “The Daily” is on the cost of college in the U.S.

You can reach Natasha and the team at briefing@nytimes.com 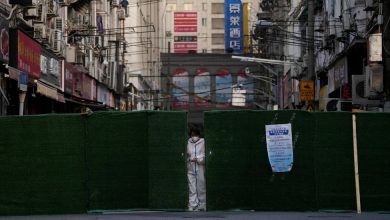 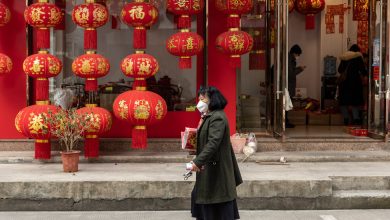 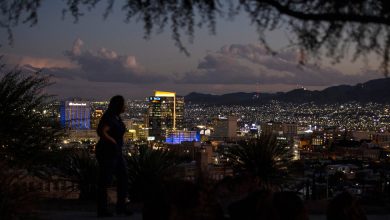 U.S. Population Ticks Up, but the Rate of Growth Stays Near Historic Lows 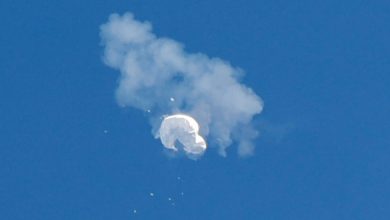