Adam Alkindi was behind a deli counter near the intersection of 48th Street and Ninth Avenue on Tuesday when he confronted an unexpected question: Did he consider his workplace a part of Times Square?

But, according to New York City, Mr. Alkindi is wrong.

This week, the city will begin to familiarize residents with a new definition of one of the Western Hemisphere’s most famous tourist destinations, having been required to by a new state law that prohibits the carrying of guns in sensitive locations, including Times Square.

However New Yorkers feel about strict limits on weapons, the map the city has drawn is so expansive that many might dispute the new boundaries, at least privately. The area covers the space from Ninth to Sixth Avenues and from 53rd to 40th Streets and consists of about three dozen blocks.

At the beginning of the year, few people anticipated that Times Square would require an official definition. With its bright lights and advertisements, world class Olive Garden location and colorful mascots, it is perhaps the most recognizable place in the city for out-of-towners. Many New Yorkers possess an innate aversion to the area, their internal compasses guiding them neatly around it.

And anyway, you know it when it you see it. As Mr. Alkindi put it: “Where it’s crowded, where there are a lot of big stores and lights. That’s Times Square.”

But in June, the U.S. Supreme Court struck down a century-old New York gun law that had placed strict limits on the public carrying of guns. In response, the state passed a new law that designated locations where people would be prohibited from carrying guns. Those included government buildings, places of worship, health care providers, libraries, playgrounds, public parks, the subway — and Times Square. 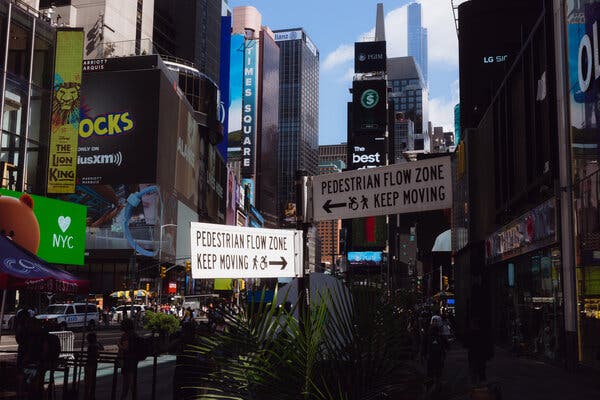 Most portions of the law go into effect this week and the mayor’s office, the New York Police Department and the City Council have rushed to promote the new map.

The City Council measure that will officially designate the area Times Square is expected to pass later in September. But last week, the police department adopted an emergency rule to cover the period before the legislation goes into effect.

In many cities, a square is a simple idea: It resembles a square, with streets or avenues running in parallel to define the space. In New York, squares — including Times, Herald and Greeley — are often patches of open space among the towers, with the street grid broken up by diagonal interlopers, and cultural boundaries that defy geometry.

In a statement, the police department said that Times Square was “not just a few streets with bright lights and video screens. It’s a unique, dense, complex space, and the area designated in our rules and the proposed bill reflects that reality.”

At a City Council hearing on Tuesday, Robert Barrows, the executive director of the police department’s legal operations and projects, said that the area would be marked by signs that warn pedestrians that the area is a “gun free zone.”

At a City Council hearing on Tuesday, Robert Barrows, of the New York Police Department, held up a copy of a sign that will be posted at the boundaries of Times Square.Credit…New York City Council

The police will allow residents licensed to carry guns to do so, if they are headed from their homes to an area outside the boundaries, or vice versa. They will also allow those who are permitted to carry handguns on business premises — such as security guards — to do so. And people with licenses will be allowed to have guns while passing through Times Square in vehicles, provided they do not stop and that the weapons are unloaded and carried in locked containers.

Authorities are trying to designate some of the city’s most highly trafficked tourist destinations off limits to those with guns. Along with the inclusion of the Port Authority terminal, the new map of Times Square stretches close to Radio City Music Hall and Rockefeller Center. The Museum of Modern Art (which, like other museums, is also defined as a sensitive location) is just a block away from the eastern border of the new Times Square.

“These are areas that are often seen as package deals for someone who’s coming into the city for the first time, or visiting Times Square,” said Carmen De La Rosa, a member of the City Council’s public safety committee who represents neighborhoods in Upper Manhattan. “If you’re going to Times Square, you may want to go over to the MOMA.”

But for many New Yorkers, the new definition defies both common sense and lived experience. Robert Govan, 62, who has lived in the city since 1993, was generous during a Tuesday interview. He allowed that the boundary could possibly reach as far north as 52nd Street.

But he knew where his personal line was drawn: For Mr. Govan, Port Authority Bus Terminal would never be a part of Times Square.

Until 1904, Times Square was known as Long Acre Square, named for a street in London. But after Adolph S. Ochs, the owner of The New York Times, decided to move the newspaper to the area, Mayor George McClellan signed a resolution that gave the area its new name.

In an unsigned article, the paper modestly argued that name “naturally suggested itself,” given that the local subway station passed through the first story of its newly constructed skyscraper. At the time, the newspaper defined Times Square as “the open space formed by the intersection of Broadway and Seventh Avenue, and extending from Forty-Second to Forty-seventh Street.” For many, that definition, or something similar, still holds.

But for some New Yorkers, the boundaries can seem flexible. Felecia Majette, 62, whose office is at the intersection of 49th Street and Sixth Avenue, said that she considered that part of Midtown Manhattan an extension of Times Square.

“There’s movement from here to there,” she said. “It’s all combined.”

Ms. Majette said she approved of the new boundaries. The last thing she wanted, she said, was“a bunch of people around here carrying guns, even if they’re allowed to have one.”

New York’s new gun measure has already been challenged in federal court by a resident of Schenectady County named Ivan Antonyuk, along with the organization Gun Owners of America. Their lawsuit seeks to have major portions of the law declared unconstitutional, including the section defining sensitive locations.

A spokesman for Gun Owners of America New York declined to comment on the new Times Square boundaries, citing the litigation.

Joseph Blocher, a Second Amendment expert at the Duke University School of Law in North Carolina, said that the New York measure had been in danger of being challenged from the moment it was passed and that the new definition of Times Square will not likely be a decisive factor.

“I would expect that the challenge will be to the cumulative geographic size of the prohibition,” he said. “You put together Times Square and the other areas designated as sensitive, how much of the city does that place off limits?”

Asked how he personally defined Times Square, Mr. Blocher said that it had been at least 15 years since he had last been there.

As Apartment Prices Climb, Renters Look for Deals in the Outer Boroughs

As His Life of Fantasy Comes Into Focus, George Santos Goes to Washington