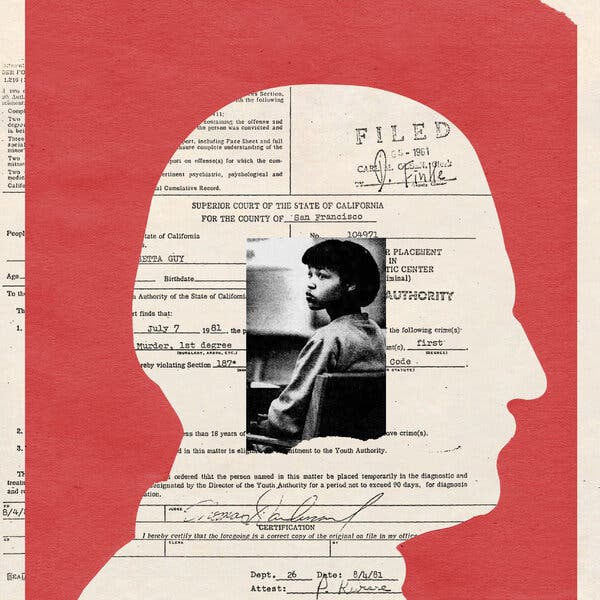 The story of Anthony Kline and Jamesetta Guy seems almost too coincidental to be true.

As told in a gripping article in The New York Times Magazine, Kline was the most senior justice on California’s First District Court of Appeal in San Francisco until last year, when, at age 83, he asked to be transferred to the juvenile bench. It seemed to be a downward career move, but Kline wanted to escape the abstract world of the appeals court, where he had spent so many decades. It had been 40 years since he had done a stint in the very real-life universe of the juvenile courts.

So Kline began handling juvenile cases — students caught at school with knives, kids stealing cars. And then, five weeks into his new role, Kline was assigned the case of Jamesetta Guy.

Guy was 58, but she was slated to appear in his courtroom because of a new California law intended to help reduce the state’s prison population. An inmate serving an inordinately long sentence for a crime committed as a minor could now return to juvenile court and have the case reconsidered.

Kline learned that Guy had served 41 years for a homicide during a botched robbery that she committed at 17. A lifelong progressive, the judge found her term to be staggeringly long, especially for someone convicted as a minor. In Kline’s view, Guy’s ordeal confirmed what he felt was wrong with California’s judicial system, inequities that he had dedicated his career to fixing.

But Kline soon learned that he was one of the people who helped put Guy behind bars many years ago. As a juvenile court judge in 1981, Kline had declared her “unfit” to be tried as a juvenile and sent her case to the adult system instead, which contributed to the length of her sentence. When he encountered the case again in 2021, he didn’t even remember the ruling.

Jesse Barron, who wrote the Times Magazine article, said, “A lot of the people around this story — including some very sober-minded lawyers — started to feel that there was a logic at play beyond pure chance, because it’s unheard-of for a judge to descend from such a lofty position in the system back to such a lowly position by comparison.”

He continued, “And then to do that, to be drawn back to juvenile as Justice Kline was, only to slam into an unfinished case from his own past — it’s a kind of coincidence that does seem almost fictional.”

The article follows Kline as he grapples with the decision he made 40 years earlier, and considers whether he could, or should, try to rectify the extreme effect it had on Guy. At the time of his original ruling, Kline thought that Guy would be sentenced to 15 years in prison. But because of a confluence of unlucky circumstances, including the harsh treatment of juveniles within California’s criminal justice system at the time, she got 27 years to life.

Jesse told me that the longest sentence Guy would have received under the current judicial system, in which punishments for minors are much less severe, was probably eight years in juvenile detention. There are many people like Guy who are currently serving sentences that would, according to today’s standards, be considered extreme and unfair. Jesse’s reporting revealed that about 470 prisoners are serving life sentences in California state prisons for crimes they committed as minors.

“A lot of those cases, if you pulled at the threads, would have similarities to Jamesetta’s, because they were decided before the Supreme Court overhauled juvenile sentencing in the 2010s,” Jesse said. “In California, for example, 15 of the 470 juvenile lifers are serving life without the possibility of parole, a sentence the Supreme Court has since found unconstitutional for juveniles.”

“Jamesetta’s is an exceptional case because it’s the same judge on both sides — that’ll never happen again, I think — but there are other people in similar situations, whose cases we might never hear about.”

Marissa Li in her dorm room at Harvard University. She didn’t emphasize her passion for chess in her college applications. Credit…Tony Luong for The New York Times

If you read one story, make it this

Applying to college, and trying to appear “less Asian.”

Advertising accounted for more than 90 percent of Twitter’s $5.1 billion in revenue last year.Credit…Jason Henry for The New York Times

The rest of the news

How to stock a modern pantry.

Tell us about your favorite places to visit in California. Email your suggestions to CAtoday@nytimes.com. We’ll be sharing more in upcoming editions of the newsletter.

Have you visited any of the travel destinations that we’ve recommended in the newsletter? Send us a few lines about your trip, and a photo!

We’d like to share them in upcoming editions of the newsletter. Email us at CAToday@nytimes.com. Please include your name and the city in which you live

And before you go, some good news

With December underway, TripsToDiscover.com, a website that provides trip-planning suggestions, released a list of the 21 best small towns to visit for Christmas — and one California town made the list: Solvang.

The tiny village, located in the heart of the Santa Ynez Valley, has European architecture and sensibilities, and goes all out for Christmas, KRON reports.

The town has dozens of boutiques that sell traditional Danish items, including clogs and other knickknacks. During the winter, much of the town is decorated with holiday lights and wreaths, and there’s a palpable holiday spirit as you walk along its decked-out streets.

Thanks for reading. I’ll be back tomorrow. — Soumya

Briana Scalia and Maia Coleman contributed to California Today. You can reach the team at CAtoday@nytimes.com.

Tags
California New That Was With

Aleksandr Dugin calls for Russia to punish Ukraine for his daughter’s death.

A Primer on U.S.-Philippine Military Ties