OLEAN, N.Y. — During his decade-plus in New York politics, Carl Paladino has had no problem making headlines, usually for all the wrong reasons.

There was the time he spoke highly of Hitler. Or the occasion when he made grossly racist remarks about Michelle Obama. Not to mention his suggestion that children have been brainwashed into accepting homosexuality.

The ensuing criticism, however, has had little effect on Mr. Paladino, 75, a die-hard Republican and a Buffalo-area developer, or on his political aspirations: After a fleeting career as a member of the city’s school board — he was effectively deposed — he has now launched a campaign to be the next duly elected representative of the 23rd Congressional District in western New York.

Mr. Paladino’s main claim to fame is a failed 2010 run for governor that was equal parts carnival ride and train wreck: He threatened a State Capitol reporter during the campaign and forwarded a series of pornographic emails.

His latest attempt at a comeback involves an ugly primary battle that has caused a deep schism in his own party. His opponent is Nick Langworthy, the state Republican Party chairman.

Mr. Langworthy, a onetime ally of Mr. Paladino, is trying to steer New York Republicans away from the crassest elements fueling former President Donald J. Trump’s MAGA following, saying that the party has “come too far” to be undone by Mr. Paladino’s antics.

Crucially, he says, Mr. Paladino could damage the campaign for governor by Representative Lee M. Zeldin, the Long Island Republican who is considered by many to have the party’s best chance of winning the governor’s mansion in two decades.

“Carl’s candidacy is a big reason why I decided to do this,” Mr. Langworthy said, calling Mr. Paladino “a huge detriment” to the Republican ticket in 2022. “We’ve got the best shot to win in 20 years, and the three-ring circus that he brings to the table, with the way that he handles things and himself, will basically be held against every candidate in the state.”

Despite his general outspokenness, Mr. Paladino has waged a largely subdued campaign, preferring to attack Mr. Langworthy via news release and interviews on reliably Trumpian outlets like “War Room” with Steve Bannon, where he recently promised not only to impeach President Biden — “on Day 1” — but also to bring down the U.S. attorney general, Merrick Garland.

One of his campaign talking points — “You know me” — seems keyed into maximizing his name recognition, which he says gives him an undeniable advantage as both a candidate and a potential congressman.

More Coverage of the 2022 Midterm Elections

“I have a proven track record as a conservative fighter, who will not back down,” Mr. Paladino said in a statement, adding that he was an early supporter of Mr. Trump. “People here know me and trust me.”

Mr. Paladino also has a decided financial edge, having lent his campaign $1.5 million — nearly the entirety of his war chest, according to federal disclosure reports. Mr. Langworthy has spent little of the $307,000 raised in campaign donations, the bulk of it from individual contributions.

Still, Mr. Langworthy is hoping that his rival’s history of transgressions will outweigh his money.

“People know you,” Mr. Langworthy said. “It doesn’t mean that people like you.”

Nick Langworthy, the state G.O.P. leader, said his goal was to prevent Mr. Paladino from becoming a “huge detriment” to the party’s ticket in November.Credit…Lauren Petracca for The New York Times

The fame — or notoriety — of Mr. Paladino, and his capacity for campaign spending are not the only obstacles that Mr. Langworthy faces. Representative Elise Stefanik, the ardent upstate devotee of Mr. Trump who is the House of Representatives’ No. 3 Republican, has backed Mr. Paladino, as have other Trump-world notables like Representative Matt Gaetz of Florida, who has had his own share of controversy.

Ms. Stefanik, in particular, has lobbed savage Trump-like bon mots back and forth with Mr. Langworthy and is expected to campaign for Mr. Paladino in the district ahead of the Aug. 23 primary.

Considering Mr. Paladino’s record of racist and sexist remarks, Ms. Stefanik’s endorsement raised some eyebrows, though she cast it as testament to his career as a business leader.

“Carl has dedicated his entire career to creating thousands of jobs in western New York and the Southern Tier, and advocating strongly for this community,” Ms. Stefanik said in a statement. “I am proud to support Carl, who is a conservative fighter.”

Mr. Langworthy and Mr. Paladino are running to represent a highly conservative, sprawling district spanning from the Buffalo suburbs to east of Binghamton. Max Della Pia is the anointed Democratic candidate.

The two Republicans’ race seems particularly personal: They had a long friendship, each as political luminaries in the Buffalo area. Their relationship was deepened by their close ties with Mr. Trump, whom both men unsuccessfully lobbied to run for governor in 2014.

Indeed, on Monday, after F.B.I. agents raided Mr. Trump’s estate in Mar-a-Lago, both men rushed to put out statements condemning the bureau’s actions, with Mr. Langworthy saying that Mr. Biden was “turning America into a banana republic,” while Mr. Paladino said the raid was “politically motivated and chilling.”

“When elected to Congress, I will work to save this nation from these disordered government agencies attacking our citizens rights,” Mr. Paladino said.

Both men declared their candidacy shortly after Representative Chris Jacobs — a scion of a powerful Buffalo family — decided not to seek a new term, abandoning his re-election effort after he announced his support for a series of gun control measures in the wake of a May 14 massacre in a Buffalo supermarket.

Mr. Jacobs’s stance caused backlash among Republican leaders, including Mr. Langworthy, who began courting voters and supporters in the district even before Mr. Jacobs formally announced his intentions to leave politics.

Michael Caputo, a former Trump administration official who managed Mr. Paladino’s campaign for governor in 2010 and is friendly with all three men, said both candidates had notified Mr. Trump of their decision to seek Mr. Jacobs’s seat. Each hoped to secure Mr. Trump’s endorsement, but he has declined to back either so far. But Mr. Caputo says Mr. Trump has been troubled by the Langworthy camp’s assertions that the former president favors their candidate.

Mr. Langworthy’s campaign, however, rejected this notion, saying he has “never implied that the president has endorsed him for Congress because he has way too much respect for him to do that.”

Mr. Paladino declined to be interviewed, agreeing only to provide written replies to a reporter’s questions. In those, he argued that it is Mr. Langworthy who is the problematic candidate, “letting his ego get in the way of his day job as state party chair.”

“Nick is causing division and is distracted from his duty of electing a Republican governor, and Republican candidates up and down the ballot,” Mr. Paladino wrote.

That argument has found some support in the state party, including from Lawrence A. Garvey, the chairman of the Rockland County Republican Party. He said he was outraged by Mr. Langworthy’s decision, saying that, as party chair, his “first job is to help get people elected.”

Mr. Langworthy, 41, discounts that argument — “It’s absolute nonsense,” he said — saying he and the state party can multitask. To be sure, Mr. Langworthy has been running a more traditional campaign, pressing the flesh at various events in western New York and the Southern Tier, racking up a roster of local endorsements, including from a variety of county-level officials who know him as a state leader.

“Nick Langworthy is my friend and was there for me when I first ran for office,” said Frank Todaro, an Erie County legislator. “His support and guidance meant a lot, and I am proud to support him for Congress.”

The race has had little solid polling, though Mr. Paladino has consistently cast himself as the front-runner, saying he has “no serious challenger.”

But at least in some places, voters are intrigued by the idea of Mr. Langworthy’s candidacy. During a discussion in July that he attended in the Cattaraugus County town of Olean, Cathy Kelley, 69, said she liked the state party chair’s support of the Second Amendment, saying she felt he was “someone who would go to bat for us.”

As for Mr. Paladino, Ms. Kelley — a homemaker from Belfast, N.Y. — said she didn’t dislike him, but she seemed concerned about his capacity for inflammatory remarks.

“Carl Paladino has a very long political history,” Ms. Kelley said. “And I guess, you know, if you want to go with somebody who goes totally rogue, maybe Carl would be the guy. But I’m not in favor.”

Tiny Oysters Are a Hopeful Sign in the Hudson River

Under an Unusual Arrangement, Adams’s Confidant Gets City and Casino Salaries 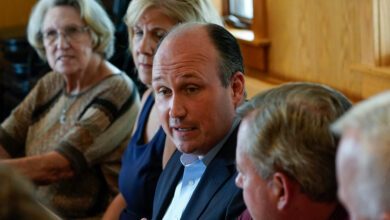 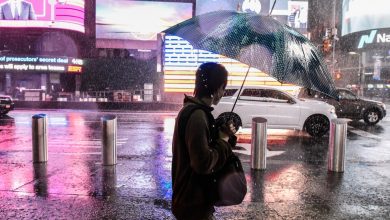 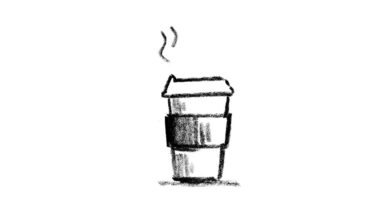 ‘I Became a Regular at a Coffee Shop Around the Corner’